Pompeii the Experience of a Lifetime! 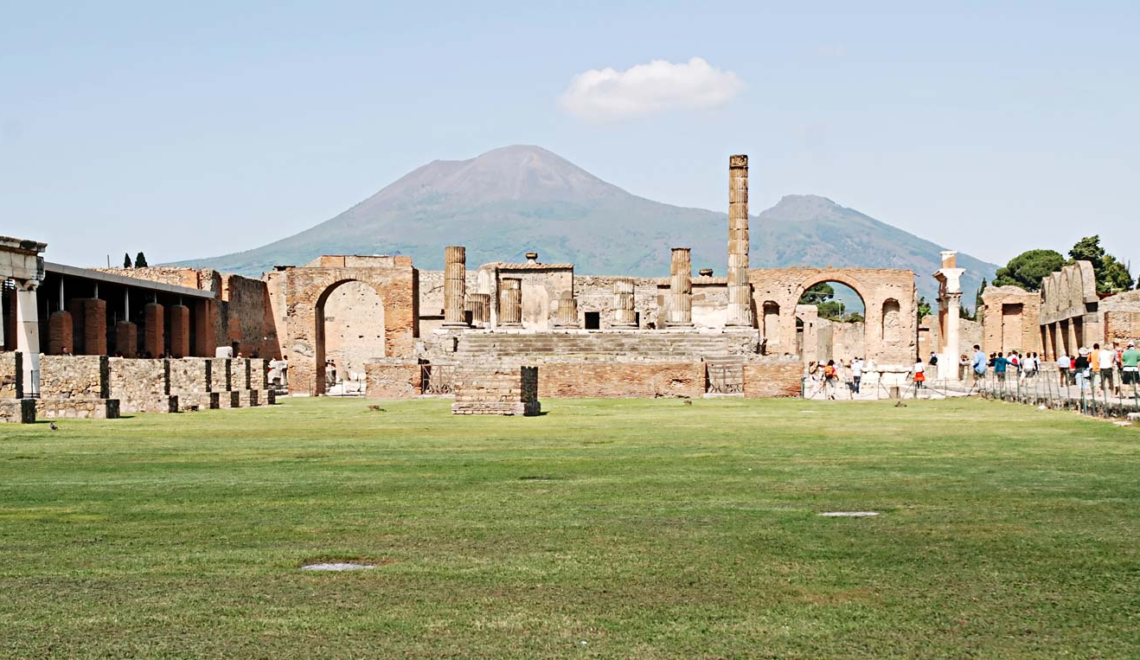 Having traveled around the world, I have visited many ruins over the years.  However, this is by far the most impactful experience I have had.  My mother has talked about her visit there for years and so I was very excited to finally have the opportunity to experience it for myself.

Pompeii is a preserved ancient Roman city in Campania, Italy, 14 miles southeast of Naples, at the southeastern base of Mount Vesuvius.  The photo above shows the ruins with Mount Vesuvius in the background.  Around noon on August 24, 79 CE, a huge eruption from Mount Vesuvius showered volcanic debris over the city of Pompeii, followed the next day by clouds of blisteringly hot gases.  Buildings were destroyed, the population was crushed or asphyxiated, and the city was buried beneath a blanket of ash and pumice.  For many centuries Pompeii slept beneath its pall of ash, which perfectly preserved the remains.  When these were finally unearthed, in the 1700s, the world was astonished at the discovery of a sophisticated Greco-Roman city frozen in time.

Pompeii takes a full day to tour.  You could honestly plan to spend an extra day there if you had the time.  I found everything here to be absolutely fascinating and I have listed some of the highlights from my visit below.

The ancient brothel is a tiny house with stone beds and scenes of sexual acts that a customer could pay for.  This is one of the most visited houses in all of Pompeii and I found it to be extremely interesting.

Contrary to the idealized images, the brothels themselves provide evidence that the women worked in cells, usually only big enough for a narrow bed.

The forum baths are small in comparison to some of the other bath houses in Pompeii.  However, I by far felt that they were the most elegant and well preserved.  It is hard to believe that in those days they had found ways to heat the baths.

The stone roadways throughout the city really gave you a sense of what things were like back in those days.  Keeping in mind that back then there were no motorized sources of transportation and everything was received and delivered by carriages/wagons drawn by horses, ox, etc.  Therefore, the streets would fill up with stool from the animals and it was each shop owners responsibility to keep the area on front of their shop cleaned off.  This definitely made me think a little different about the term “shit rolls down hill”!!!

The Forum is located near the main gate to enter the city.  It was main gathering space for the people of Pompeii for religious and commercial events.

House of the Small Fountain

The layout of this house, situated in an important position along via di Mercurio, is set in such a way that the beautiful found that decorates the garden at the back can be seen immediately from the entrance and imagine the high social status of the owner.

The fountain is covered with colorful mosaics and shells and is adorned by a bronze statue of fisherman and a cherub.  The walls of the peristylium are frescoed with great landscape views painted on a few years before the eruption.

The Great Palestra was used as an exercise park and place for youth groups.  Primarily used for sports and games, this facility also housed a swimming pool.

This is one of the oldest houses in Pompeii and is believed to have been an Inn.

Garden of the Fugitives

Throughout the tour, we saw areas where bodies are encased in glass and on display.  However, this part of the tour was definitely the most disturbing.  There are 13 bodies in the garden, frozen in a grotesque and agonizing display that reflects the horrible final moments of the city.

The Villa of the Mysteries

The Villa of the Mysteries is located just outside of the main area and are amazingly well the images have been preserved. I was amazed at how colorful they were.

The Stabian Baths are the oldest in Pompeii.  The bath area also had a gym, workout area and a very large swimming pool.

I could go on and on about this experience, but you will never get the true feeling of Pompeii until you visit it personally.  It is absolutely amazing!!!!

Start in the back in order to avoid large crowds.

Don’t do the audio guide as it doesn’t explain much more than the free booklet they give you does.

Do a guided tour for the best experience.

Take the train and get off at the Pompei Scavi – Villa Dei Misteri station.

Don’t bring a large backpack due to security previsions.

If you are going to do the tour, do an official tour found INSIDE the gate.